skip to main | skip to sidebar

Greetings Janus Bridge Fans, this is Stephanie checking in to update you on news and events coming up for us.  We are excited about our long-awaited upcoming two-woman show "Beyond Reflection". Angel and I have been working diligently on all the works for this show for over a year now and we are happy to be exhibiting it where we met, at the ArtCenter/South Florida.


The Past
Currently we are working on three collaborative pieces. We decided that our theme for these pieces would be our visions of the past, present and future. For our "Past", reincarnation would be the main theme for us and we thought it would be fun to paint who we thought we were in a past life. I, of course was Oscar Wilde in Russia! One of my favorite writers and artistic inspirations. Angel decided to choose one of her relatives from Italy in full period costume, with Italy as her backdrop.


The Present
At the moment, we are finishing up our "Present" collaborative painting. This painting we wanted to have fun with. So, what was our inspiration? The circus! Although, not huge fans of the circus, Angel and I both adore vintage circus posters. Since, we feel that at times we live in a circus, we thought it would be a "tongue-n-cheek" fun approach to express how we feel about our lives in the present. This painting is stylistically different because there is a lot of text and designing involved in the composition. I enjoy writing in calligraphy, so I though this would be a great opportunity to include it.
The Future
For the future collaboration, we thought it would be interesting to try something that we both have never done before. We decided to create an "Exquisite Corpse". A technique created by the Surrealists during the 1920's. Check out these interesting links to learn more about it!

Hello blogger friends! As you will see, Angel and I have been very busy painting away finishing up our Childhood diptychs and collaborative paintings for group exhibits in Ft Lauderdale and Miami. Here they are: 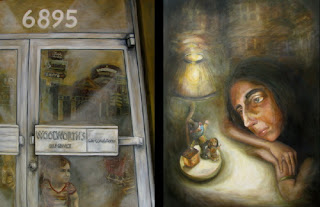 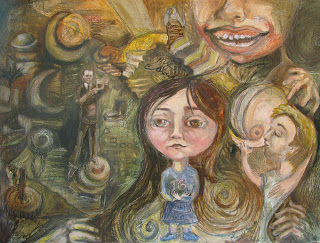 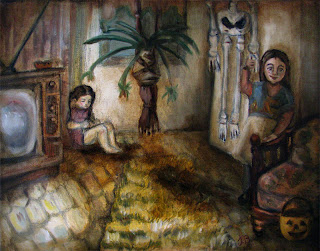 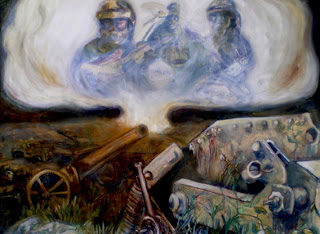 That Which Is Imagined Can Never Be Lost, oil on watercolor paper
Through the Eyes of Love, Miami International University of Art and Design
December, 2010 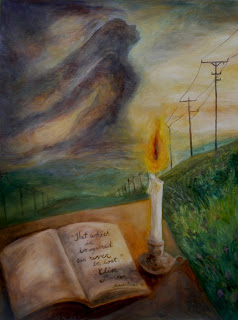 I have enjoyed working on these collaborative pieces. The process for us is very organic and natural.  We start off with sketches, then they are combined together. After the sketch is finalized we begin painting at the same time, switching sides back and forth until the painting is done.


To read more about our process, Colleen Dougher from City Link wrote an article about us in Art Murmur: http://artmurmur.citylinkmix.com/uncategorized/janus-bridge-art-collective/


What's next for us? A two-lady show! In the new year, we will be showing our Beyond Reflection series at the Art Center. We will keep you posted!


Happy Holidays to everyone!


Best,
Stephanie
Posted by Janus Bridge Art Collective at 10:08 AM No comments:

Angel signing in. It’s been a long, hot summer and the “Janus Head” portrait is on hold. When we paint together, out-of-doors is really the way to go, but it will have to wait for a Florida Autumn. Still, here are a few images of the work-in-progress! 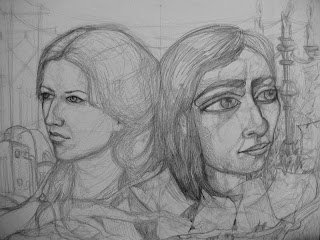 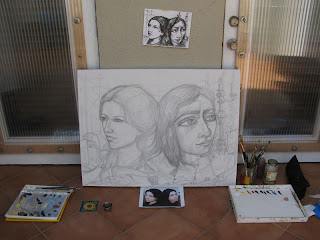 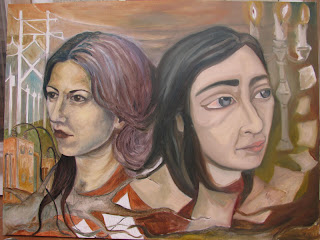 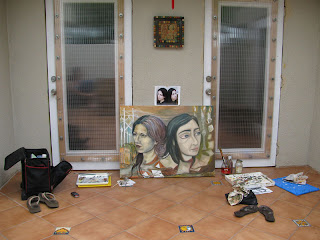 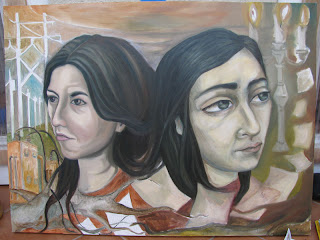 In the mean time, we’ve been quite busy.  The website (www.janusbridge.com) has been updated, and we’ve FINALLY completed the Literary Portraits.  Since I’ve been completely blog-less for a while, I thought I’d write about my reflections on the past two portraits I’ve completed during this collaboration.
Internal Crossroad 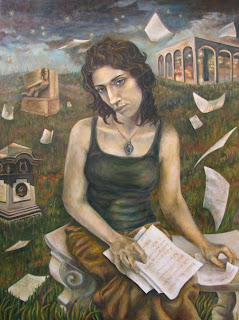 I really got to know Stephanie by working on this one. Our early conversations often found their way back to spiritual territory…fate, reincarnation…. I could see her in a cemetery, in a field. I also saw her surrounded by papers. She’s always working in her sketchbook – I envy her consistent practice! She keeps her notes, sketches, inspirations and instructional materials close by, and she always had something new to show me. As the sketch for this painting developed, I began to include some of her favorite things, such as the quotes on the papers, and the tombs of Oscar Wilde and Edgar Allen Poe. The reference for her face was taken from an old photo she had…it was taken in a freight elevator by a college friend, and she really looked like some dead silent movie actress. That photo captured something about her, so I had to include it in this image as well. Some of my own imagery snuck in…such as the radio towers (communication / human spirit) and the mausoleum (local, personal landmark).
What I found interesting about the process behind this one was how easily we worked together. We didn’t have to make agreements and compromises about format and color scheme…the paintings just evolved naturally as we worked in the same studio.
Motive Power 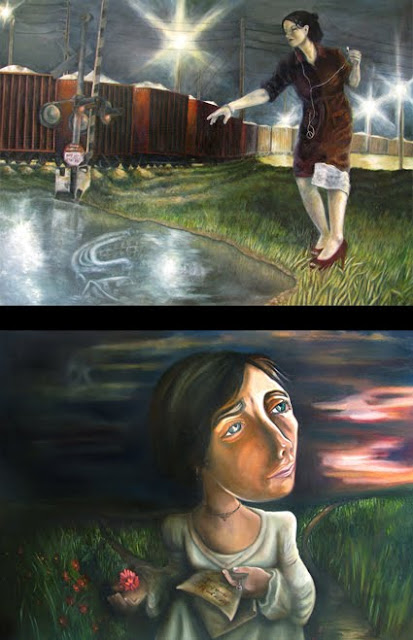 It’s no secret that Stephanie and I both labored over these Literary Portraits. We ran into a lot of snags. Even photographing these were difficult!
My half of this diptych depicts my self-portrait in the form of Dagny Taggart (the heroine of Atlas Shrugged – the epic novel by Ayn Rand). I included many symbols that relate to the story: the train (the railroad Dagny runs), the bracelet (her lover, Hank), the newspaper (her former lover, Francisco), the headphones (the music that gives her strength), and the motor (John Galt – what she is chasing throughout the story). Ayn Rand’s books have been a great source of inspiration for me, and Dagny’s character was always one I could relate to. She’s strong, driven and capable, but also stubborn and prone to taking others’ responsibilities on her shoulders. The apocalyptic aura of the story was also attractive to me, as well as the theme of the train. I spent time photographing trains off of the turnpike extension in to get references for this painting…that might have been the most fun part of making this image! The eerie feeling of those night shots helped inspire the surreal quality of this painting, where Dagny is searching for something that is out of reach.
Our new as-of-yet-untitled “Childhood” diptych!
We’re still working on these. Here are some sneak peeks. Will write more on these later! 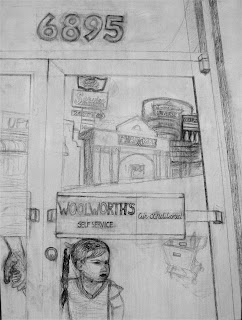 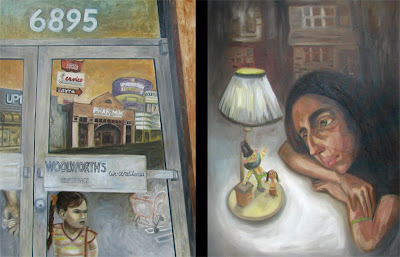 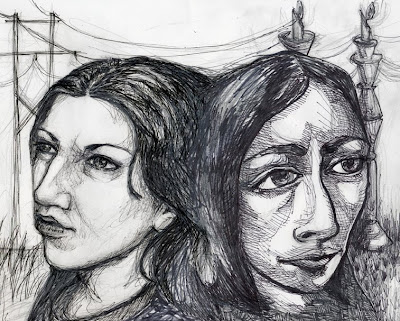 While we are busy working away on our second diptych painting, Angel and I decided to begin sketches for our "collaborative" painting. I am posting our sketch above. We will work on the painting  simultaneously together. We are very excited to find out how it will develop when we switch to paint on each other's side!
To document this process, we are creating a video piece. Check back later as this project develops!


-Stephanie
Posted by Janus Bridge Art Collective at 8:32 AM No comments:

We will be posting new sketches of our new paintings very soon!
-Stephanie
Posted by Janus Bridge Art Collective at 5:33 PM No comments:

The second most difficult part of forming an art collective is choosing a name.  Nothing sounds right until you've heard it a while, and it begins to build associations in your mind...then you start getting somewhere.

The image of the Janus head has been in our thoughts since the beginning of our collaboration...long before the concept of 'art collective' was ever put into words between us.  Janus is the Roman God of doorways, gates, and of beginnings and ending.  He is depicted as having two heads, facing in opposite directions because he had the power to see both the future and the past. 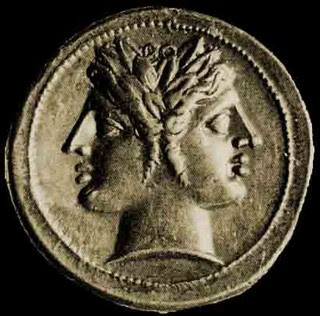 Janus was also a significant symbol for us since he also represents the transitions between the opposite sides he perceives.  Our work and our vision are two sides of the same coin, and we needed to bridge those two faces if we wanted this collaboration to be fruitful.

This didn't mean that "Janus Bridge" was a shoe-in.  There was talk about hourglasses and countless sketches of eyes...but we couldn't forget an early drawing Stephanie made of us as Janus, or my constant mentioning of the connection between the lone, flaming candles that appeared in her work and the stark power lines that repeated throughout my paintings.  Her emblem for inspiration and creative fire, the candle, was a traditional symbol that called us back to our connection to the past...and although my power lines were more modern and industrial, they were just as much about the enduring spark of the human spirit.

When we drew the utility pole and the candelabra together, as it appears at the top of the page, we saw two sides of the same energy, reaching out, but still linked.  This was the "Janus Bridge".

Janus Bridge is working hard on the new diptych...more to come...!

Posted by Janus Bridge Art Collective at 7:58 PM No comments:

The symbols in "Angel's Lost Serenade"

The core of my work is inspired by portraits and the personalities behind them. I was  working on a series of paintings called "The Unknown Musician" which explores music personalities through portraiture when I first met Angel at the ArtCenter/ South Florida in Miami Beach.  I remember walking past her studio and being awestruck by her emotionally complex paintings and compositions that reminded me both of Edward Hopper and Andrew Wyeth. What struck me the most was how she painted her hands in such a bold, expressive manner. They reminded me of many of the German Expressionist paintings that have shaped my development along the way as an artist. I knew I had to get to know her!

So, when faced with the challenge of painting her, I wanted to capture all that I could about her complex personality and incorporate the symbolism and visuals from the series as well. It is always my goal to capture the soul of the subject. I choose to distort the features of the face and focus on the most interesting features of a person. For Angel, it was definitely her eyes and her mouth. She is holding a burning candle which is a very significant image from my work because it symbolizes the core of inspiration and Angel embodies this inspiration in her as she paints.

Her figure is engulfed by a vast landscape with purple flowers close to her, which are not really flowers, but "weeds" as she calls them. In the background you see power lines, an image she often includes in her  paintings a symbol of industry. At the top of the painting sits a dream-like scene, where heavy metal rocker Dave Mustaine from Megadeth is serenading her amongst an Impasto backdrop of Vincent van Gogh's "Starry Night".  I chose Dave to be her serenader because of his huge influence on Angel as a teen (also a homage to heavy metal). Van Gogh was another huge artistic influence to her painting style and growth as an artist.

These are just a few images from the painting. If you can spot more, don't be shy to leave a comment!

Posted by Janus Bridge Art Collective at 10:48 AM 2 comments:

Working on the final touches...